All About Mars resources from National Astronomy Week for parents, teachers and students 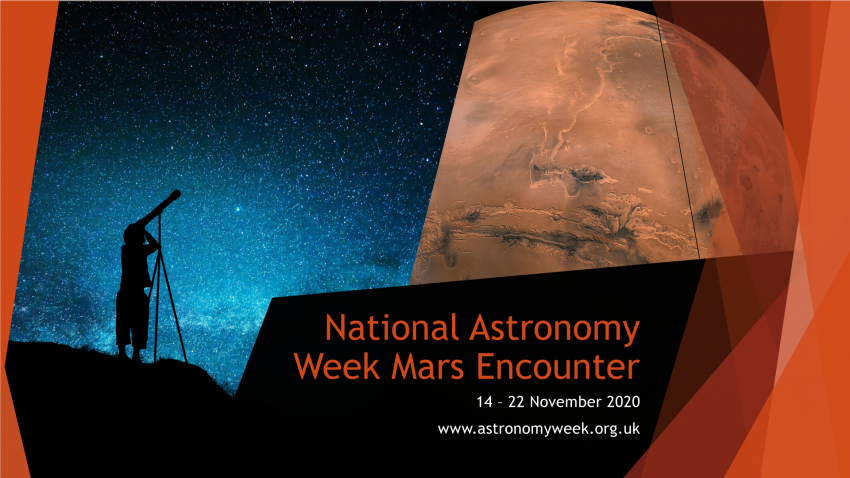 National Astronomy Week is a national event to inspire the public about the night sky. In 2020 the focus was for a 'Mars Encounter'.
Credit
RAS/Lucinda Offer
Licence type
All Rights Reserved

The Royal Astronomical Society hosted the National Astronomy Week (NAW) for the United Kingdom in November 2020 whose focus was Mars, the planet. You can learn more about the event here: https://astronomyweek.org.uk/

With the successful landing of the NASA Perseverance rover in February 2021, we thought we would highlight some of the great activities and resources that the NAW provided  for students, teachers and parents.

We have made the links available for quick access, and below them, we have added information about each resource and what they have to offer about the red planet.

Hear about microbes from astrobiologists at the Open University and a search for life activity with the Observatory Science Centre in Herstmonceux, both for young curious students. Watch Life on Mars here.

Astrobiologists from the Open University and the Observatory Science Centre talk and do activities about life on Mars.
RAS/Lucinda Offer
Licence type
All Rights Reserved

Learn about the similarities of Mars and Earth and a bit about ESAs rover Rosalind Franklin with Jo Fox. We also have Aine Flood, an astronomer from I-LOFAR in Ireland who shares with us about the Sun and what it is like to be an astronomer. Lots of questions about Mars, astronomy, and rovers throughout. Watch Mars on Earth here.

Tales of Mars for Early Years and Special Educational Needs

An amazing event with the Lightyear Foundation taking us on a walk through Mars using makaton to communicate with us and Explorer Dome taking us on a journey of the night sky. Both are fun excursions to take part in and to enjoy the stories and images they share with us. Watch Tales of Mars here.

Robots on Mars for KS2/3

With the University of Glasgow Roving with Rosalind team sharing their Lego rover design of ESAs Rosalind Franklin rover kits and the Glasgow Science Centre showing how to build our own rover using every day household items. Watch Robots on Mars here.

University of Glasgow and Glasgow Science Centre talk and do an activity about rovers on Mars.
Credit
RAS/Lucinda Offer
Licence type
All Rights Reserved

The National Space Academy joins us to share what a future career on Mars might be and tells us all about what it might be like to live and work on Mars. They also share current careers in space in the UK and the people who are working to get into space. An extensive Q&A took place with the National Space Academy to answer all the curious questions about Mars and space careers. Watch Martian Careers here.