Milky Way found to be more unique than previously thought 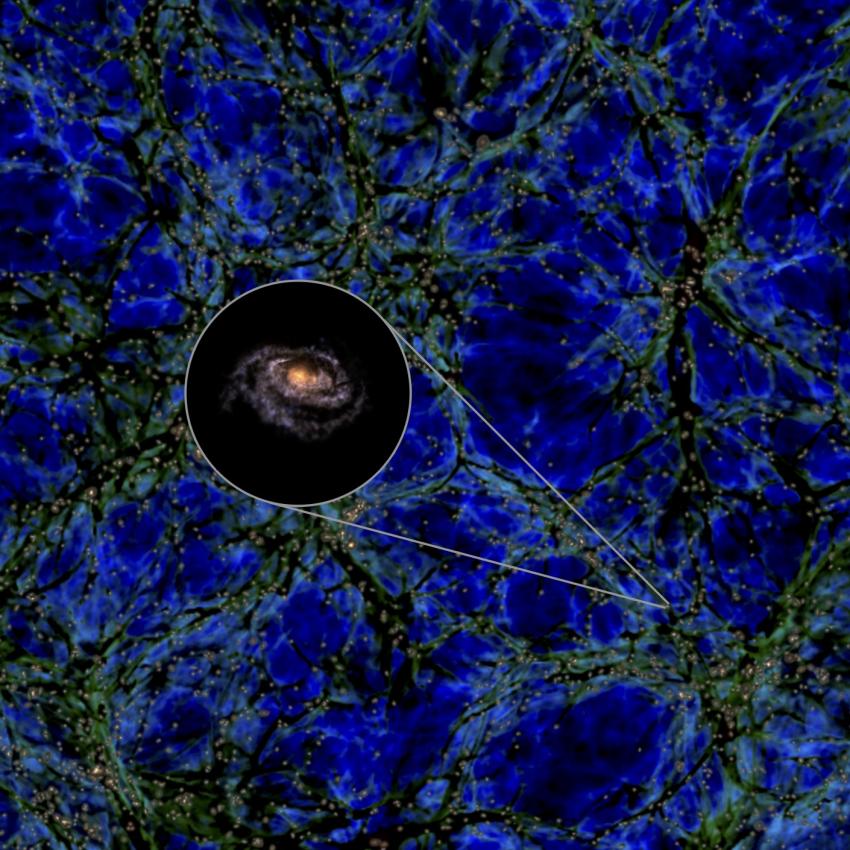 A lonely Milky Way Analogue galaxy, too massive for its wall. The background image shows the distribution of dark matter (green and blue) and galaxies (here seen as tiny yellow dots) in a thin slice of the cubic volume in which we expect to find one of such rare massive galaxies.
Credit
Images: Miguel A. Aragon-Calvo. Simulation data: Illustris TNG project
Licence type
Attribution (CC BY 4.0)

Is the Milky Way special, or, at least, is it in a special place in the Universe? An international team of astronomers has found that the answer to that question is yes, in a way not previously appreciated. A new study shows that the Milky Way is too big for its “cosmological wall”, something yet to be seen in other galaxies. The new research is published in Monthly Notices of the Royal Astronomical Society.

A cosmological wall is a flattened arrangement of galaxies found surrounding other galaxies, characterised by particularly empty regions called ‘voids’ on either side of it. These voids seem to squash the galaxies together into a pancake-like shape to make the flattened arrangement. This wall environment, in this case called the Local Sheet, influences how The Milky Way and nearby galaxies rotate around their axes, in a more organised way than if we were in a random place in the Universe, without a wall.

Typically, galaxies tend to be significantly smaller than this so-called wall. The Milky Way is found to be surprisingly massive in comparison to its cosmological wall, a rare cosmic occurrence.

The new findings are based on a state-of-the-art computer simulation, part of the IllustrisTNG project, which simulated a volume of the Universe nearly a billion light-years across that contains millions of galaxies. Only a handful – about a millionth of all the galaxies in the simulation – were as “special” as the Milky Way, i.e. both embedded in a cosmological wall like the Local Sheet, and as massive as our home galaxy.

According to the team, it may be necessary to take into account the special environment around the Milky Way when running simulations, to avoid a so-called “Copernican bias” in making scientific inference from the galaxies around us. This bias, describing the successive removal of our special status in the nearly 500 years since Copernicus demoted the Earth from being at the centre of the cosmos, would come from assuming that we reside in a completely average place in the Universe. To simulate observations, astronomers sometimes assume that any point in a simulation such as IllustrisTNG is as good as any, but the team’s findings indicate that it may be important to use precise locations to make such measurements.

“So, the Milky Way is, in a way, special,” said research lead Miguel Aragón. “The Earth is very obviously special, the only home of life that we know. But it’s not the centre of the Universe, or even the Solar System. And the Sun is just an ordinary star among billions in the Milky Way. Even our galaxy seemed to be just another spiral galaxy among billions of others in the observable Universe.”

“The Milky Way doesn’t have a particularly special mass, or type. There are lots of spiral galaxies that look roughly like it,” Joe Silk, another of the researchers, said. “But it is rare if you take into account its surroundings. If you could see the nearest dozen or so large galaxies easily in the sky, you would see that they all nearly lie on a ring, embedded inthe Local Sheet. That’s a little bit special in itself. What we newly found is that other walls of galaxies in the Universe like the Local Sheet very seldom seem to have a galaxy inside them that’s as massive as the Milky Way.”

“You might have to travel a half a billion light years from the Milky Way, past many, many galaxies, to find another cosmological wall with a galaxy like ours,” Aragón said. He adds, “That’s a couple of hundred times farther away than the nearest large galaxy around us, Andromeda.”

“You do have to be careful, though, choosing properties that qualify as ‘special,’” Dr Mark Neyrinck, another member of the team, said. “If we added a ridiculously restrictive condition on a galaxy, such as that it must contain the paper we wrote about this, we would certainly be the only galaxy in the observable Universe like that. But we think this ‘too big for its wall’ property is physically meaningful and observationally relevant enough to call out as really being special.”

The research appears in ‘The Unusual Milky Way-Local Sheet System: Implications for Spin Strength and Alignment’, Aragon-Calvo et al., published in Monthly Notices of the Royal Astronomical Society, in press.

You can find high resolution simulation images and an interactive map of the Local Sheet here.