Red Alert: massive stars sound warning they are about to go supernova 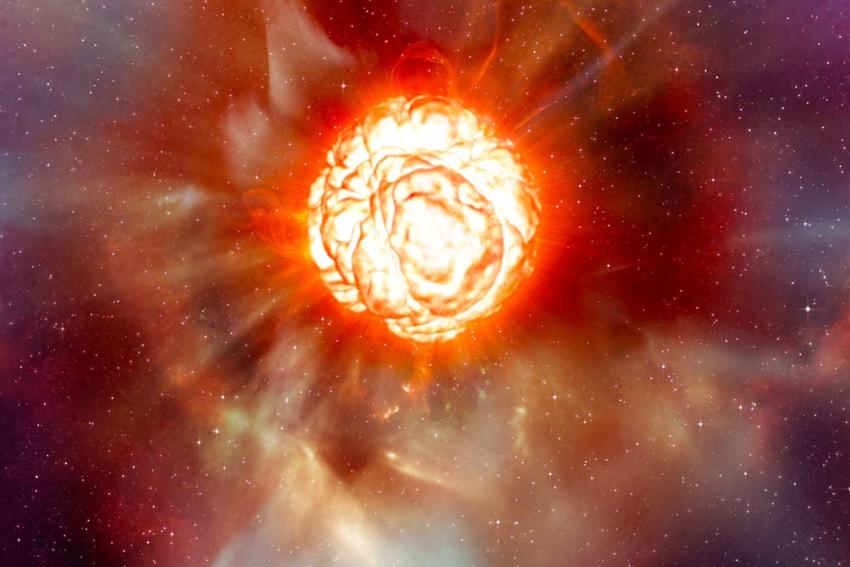 This artist’s impression shows the supergiant star Betelgeuse as it was revealed thanks to different state-of-the-art techniques on ESO’s Very Large Telescope (VLT), which allowed two independent teams of astronomers to obtain the sharpest ever views of the supergiant star Betelgeuse. They show that the star has a vast plume of gas almost as large as our Solar System and a gigantic bubble boiling on its surface. These discoveries provide important clues to help explain how these mammoths shed material at such a tremendous rate.
Credit
European Southern Observatory/L. Calçada
Licence type
Attribution (CC BY 4.0)

Astronomers from Liverpool John Moores University and the University of Montpellier have devised an ‘early warning’ system to sound the alert when a massive star is about to end its life in a supernova explosion. The work was published in Monthly Notices of the Royal Astronomical Society.

In this new study, researchers determined that massive stars (typically between 8 and 20 solar masses) in the last phase of their lives, the so-called ‘red supergiant’ phase, will suddenly become around a hundred times fainter in visible light in the last few months before they die. This dimming is caused by a sudden accumulation of material around the star, which obscures its light.

Until now, it was not known how long it took the star to accrete this material. Now, for the first time, researchers have simulated how red supergiants might look when they are embedded within these pre-explosion 'cocoons'.

Old telescope archives show that images do exist of stars that went on to explode around a year after the image was taken. The stars appear as normal in these images, meaning they cannot yet have built up the theoretical circumstellar cocoon. This suggests that the cocoon is assembled in less than a year, which is considered to be extremely fast.

Benjamin Davies from Liverpool John Moores University, and lead author of the paper, says “The dense material almost completely obscures the star, making it 100 times fainter in the visible part of the spectrum. This means that, the day before the star explodes, you likely wouldn't be able to see it was there.” He adds, “Until now, we’ve only been able to get detailed observations of supernovae hours after they’ve already happened. With this early-warning system we can get ready to observe them real-time, to point the world’s best telescopes at the precursor stars, and watch them getting literally ripped apart in front of our eyes.”

The research appears in ‘Explosion Imminent: the appearance of Red Supergiants at the point of core-collapse’, Benjamin Davies et al., published in Monthly Notices of the Royal Astronomical Society, in press.